Radio Tagumpay airs 2-4 pm on Mondays, via Triple H 100.1FM and has been serving the Fil-Aus and the wider community since 2014.

Radio Tagumpay is committed to ensuring its continued success being , the 2019 Finalist for Best Ethnic Program, by offering high standards of content and broadcasting. 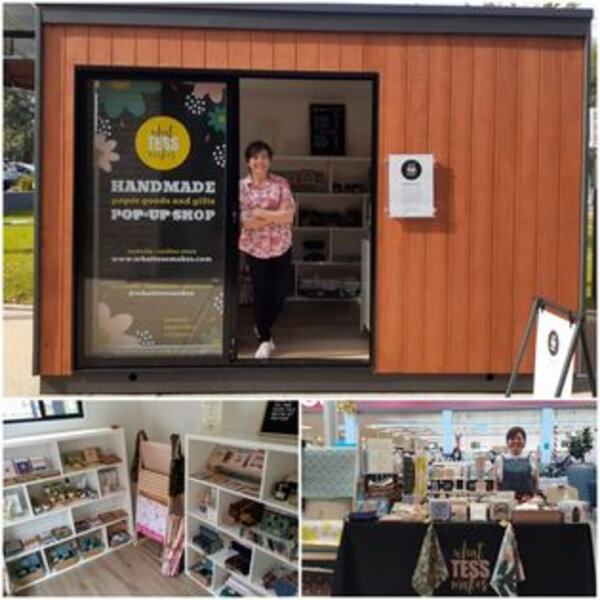 9 May 2022, 4pm Radio Tagumpay Design Talk – Tess Angala – What Tess Makes – Crafting interview by Katherine Co-Elliott of Tess Angala.  Design Talk has invited her omce again to chat and update us with the progress of her creative and entrepreneurial journey. Promoting and selling locally handmade products doesn’t end with creating an online presence, there are different avenues for the maker to put their products and brand out in the market. Find out how Tess find ways to grow her handmade business and keep her creative juices flowing even after more than 20 years advocating for handmade paper products and crafts. 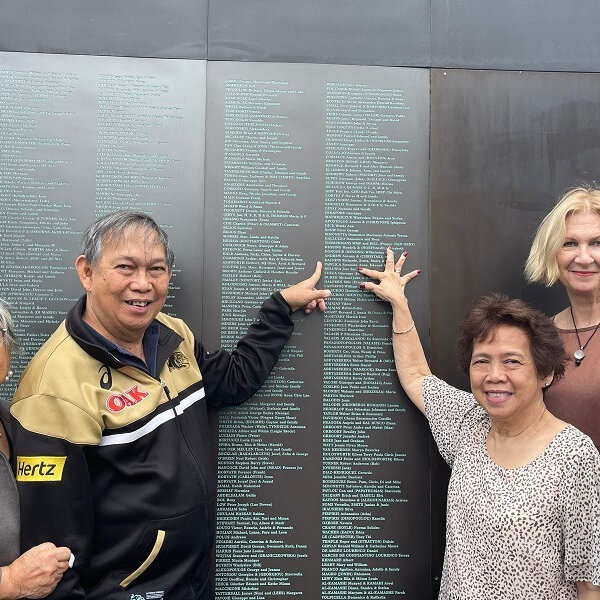 9 May 2022, 4pm Radio Tagumpay Jun Relunia Interview   Interview by Criz Guce and Rado Gatchalian of Jun Relunia, OAM and President of PASCI.  This is part of the promotion of the appeal for the National Monument to Migration.  Jun’s father was inscribed in the last intake on March 20.  Jun shares the achievements and contributions of his father to the Fil-Aus and the wider communities which had been shared in the online page in the National Monument to Migration stories about Mr Jose Relunia Sr and why family decided to pay tribute to him as part of the national monument.  Jun also inviting the listeners and all to join the national monument.  The deadline for the next intake is on June 30, 2022. 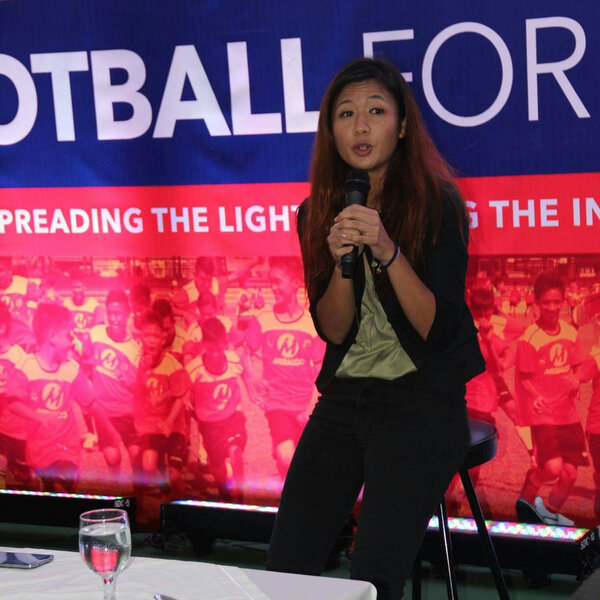 9 May 2022, 4pm Radio Tagumpay Belay Fernando-Dela Cruz Interview Interview by Violi Calvert of Isabella (Belay) Fernando-Dela Cruz who is the head of Filipinas.  Belay shares her football journey and how she got involved with the team.  Belay who spent several years in the USA went back to the Philippines with the family to help her grandfather who ran for a government office in Bacoor, Cavite; then her mother also serving 15 years in the government.  Sadly, she lost her mother due to Covid-19.  Belay played as a Defender in the initial part of her football involvement, then was asked to be goalkeeper and became more known in that role.  She has assumed management role for previously for the men’s national football team, then Filipinas.  She also shared that she is a breast cancer survivor. 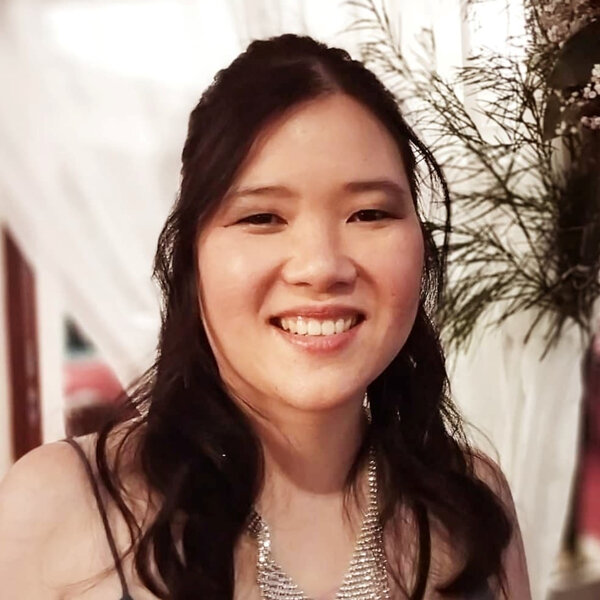 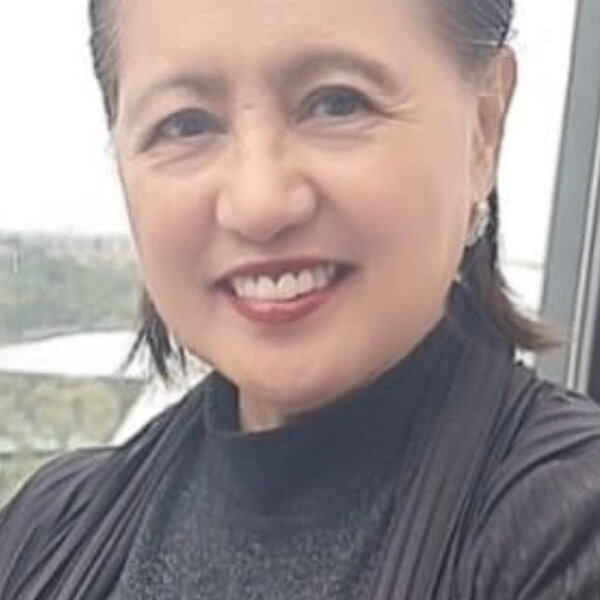 2 May 2022, 4pm Radio Tagumpay Norma Hennessey Interview May 2, 2022 Interview of Norma Hennessey who is based in Adelaide, South Australia.  Norma has recently published a novel titled “The Last Spirit Child” the story of which is about a tradition practised by a tribe in the mountain province in the olden days. She will share the process she undertook to compile information she wrote over a period of time, right through to having the book published. Norma who is 64, was born in Benguet province, (Cordilleras); while her mother was from Abra and her father was from Tarlac. She had a brother-younger than her but he passed away in his teens. She is an FEU alumnus, Bachelor of Sc in Commerce – Accounting major. Her family moved to Oz in 1997. Worked in sales and tour and travel operation in the Ph., RTO administrator in Oz. Simultaneously, she started art in Ph and had her first major individual exhibition at the golden jubilee of Gregorio Araneta University Foundation in 1996. She had my first solo exhibition at the Adelaide International Fringe in 1998 and has been actively involved in the arts in Oz ever since. 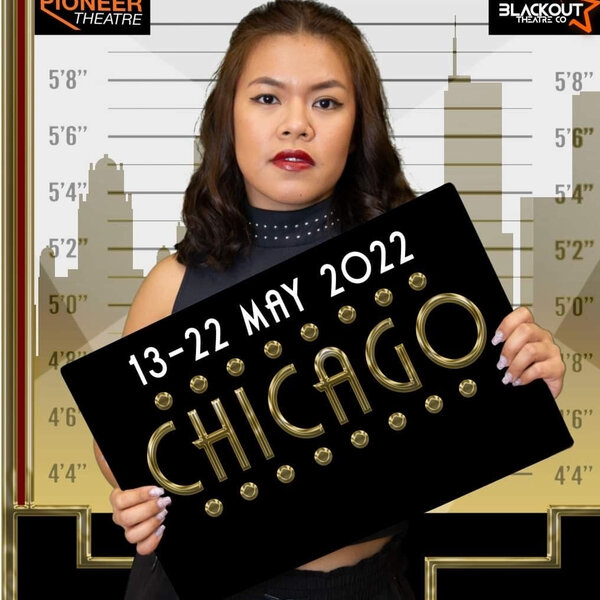 2 May 2022, 4pm Radio Tagumpay Fiorella Bamba Interview – May 2, 2022 Interview by Rado Gatchalian and Katherine Co-Elliott of Fiorella Bamba who plays the lead role in Chicago the Musical.  Fiorella is a Filipino/Australian dancer, singer and actress born in Milan, Italy. She is an only child of her parents who hail from Pampanga and Laguna but I grew up in Quezon City, Greater Manila area.  She started dancing at three years old with Glenda Yee School of Dance then travelled to the Philippines to train in jazz and contemporary with Douglas Nierras Powerdance, being the youngest professional company dancer at the age of ten years.  She graduated from the University of the Philippines, Diliman with a Bachelor’s Degree in BA Speech Communication whilst training, touring and choreographing for the UP Filipiniana Dance Group. She migrated to Australia with both parents from 1997-2005.  Then moved to the Philippines with her father in 2006-2017.  She returned to Australia by herself to live with her mother in 2017. Now based in Sydney, Fiorella is continuing her love for performing through Musical Theatre and is debuting her first lead role in Chicago as Velma Kelly with Blackout Theatre Company (BTC). Other musical credits include; Singing in the Rain and Beautiful: The Carole King Musical as Shirelle (BTC), Mamma Mia! as Ali & Lisa Understudy with Packemin Productions and Choreographer for High School Musical on Stage with Ruby Productions. Fiorella was cast as Oz in We Will Rock You with BTC and Chistery/Shenshen in Wicked with Packemin Productions which unfortunately did not make it to the stage due to the COVID-19 pandemic. Fiorella is thrilled to be portraying the role of Velma Kelly bringing to the stage her pizzazz and All That Jazz. 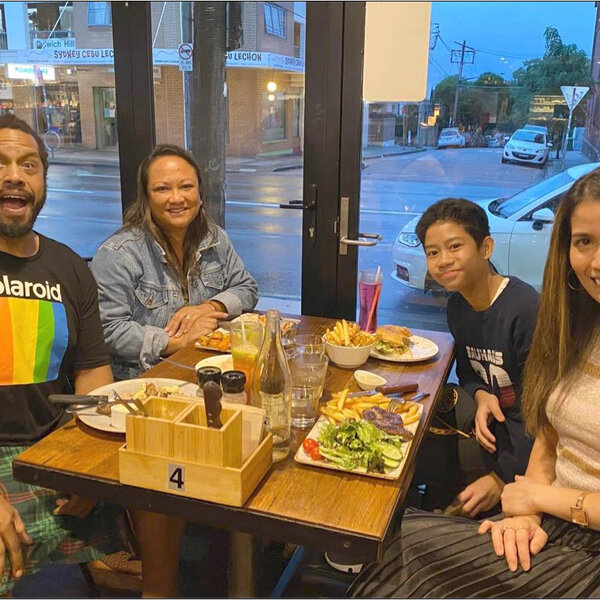 25 Apr 2022, 6pm Radio Tagumpay Update interview of Matthew Andre Dino, 12y/0, Yr 7 at St John XXIII Catholic College- Stanhope Gardens. He has x2 older brothers. He composed Superheroes in Disguise in 2020 for the frontliners of Covid which landed him a Channel 7 sunrise interview. The song that he released recently is another version of the original song and Lionel Cole (Nat king Cole’s nephew and son of Freddy Cole) has produced for him. His musical inspiration has got to do with Bruno Mars and Michael Jackson. He has written a few more songs and he aims to finish an album very soon. 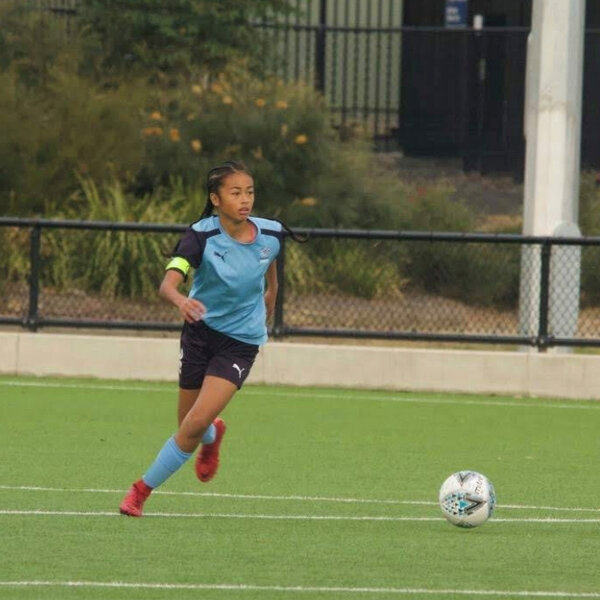 25 Apr 2022, 6pm Radio Tagumpay Interview of Chantelle Maniti, Midfielder of Filipinas, Philippine Women’s National Football Team. Chantelle is the only Fil- Aus player in the team and one of the young ones on the team. The seventeen-year-old from South Western Sydney who was born in Sydney is Player #13 and a Defender. She is the second youngest of four siblings, with an older sister, a younger brother and an older brother, Jacob Maniti who plays with the Azkals, Philippine National Men’s Football Team. Her Filipino heritage is from her father who hails from San Fernando, Pampanga before moving in his early 20s to Australia to then meet her mother. 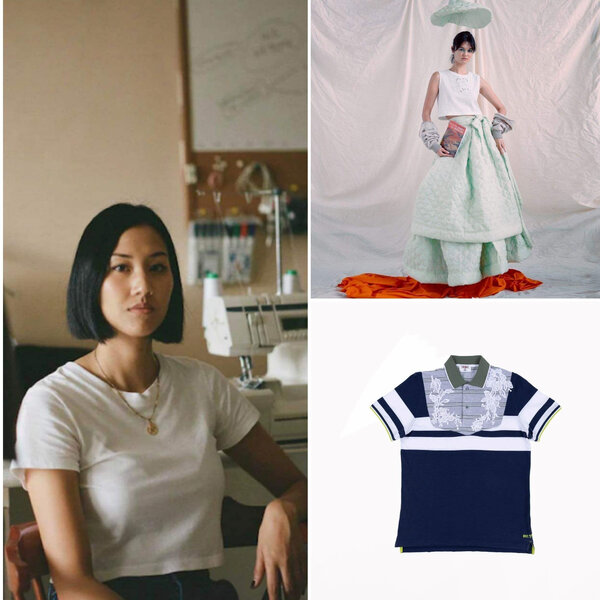 25 Apr 2022, 6pm Radio Tagumpay Interview by Katherine Co-Elliott of Nicole Oliveria – Fashion Designer. Nicole was born in Australia from Filipino parents. Her Dad was from Mabatang Bataan while her Mum was from Kalibo Aklan. Her parents and 2 older siblings migrated to Australia in the late 80s settling in Blacktown, Western Sydney. She did 2 years of hospitality then spent a gap year in London before taking Fashion Design degree (5 year course) at UTS, having graduated 2 years ago. She left her retail job of 2 years to focus on carving out her career in fashion. She draws her inspiration for her unique pieces from her experiences as a second-generation Filipina living in Western Sydney coupled by her passion for slow fashion and sustainable practices. Nicole’s one-off unique clothing will be exhibited at Fairfield City Museum and Gallery on 29th April (for 6 months) and her work was even featured in Vogue Australia. 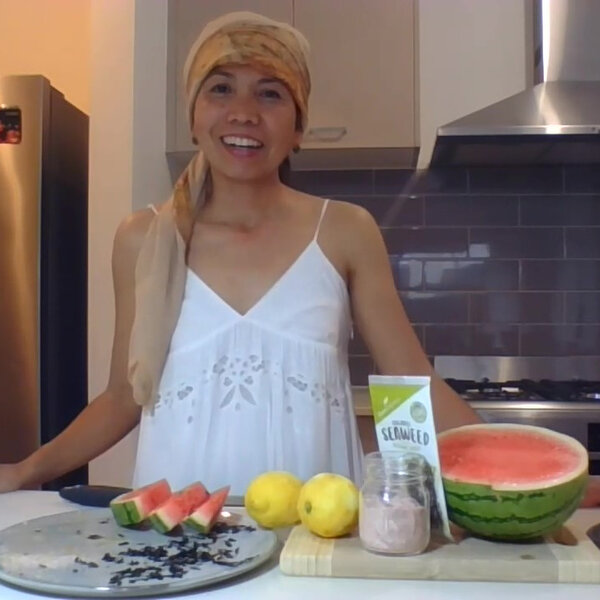 11 Apr 2022, 4pm Radio Tagumpay Interview by Katherine Co-Elliott of Arlene Tribo  who is a full time entrepreneur – makes and sells wholefood organic vegan food. Arlene was born in Binan, Laguna in 70’s, when she was 15 years old, her family migrated to New Zealand. She lived there for 31 years then in Oct 2017, she moved to Australia, residing in Melton, West of Melbourne. She finished Economics and Education, mostly worked for financial services, did a one-year stint as a High School Teacher teaching economics but found it hard and pay wasn’t good so went back to financial services. When Arlene was 37 years old, she experienced a debilitating autoimmune disease rheumatoid arthritis, with stiff and swollen joints rendering her almost immobile. Her sister in America told her about a research where they found vegan food helped patients improve their conditions. Not wishing to give up her food, she initially hesitated, eventually relented when she found the medication she is taking was not 100% helping her condition. The positive result of consuming vegan diet led her to start a wholefood organic vegan business which she now does full time. 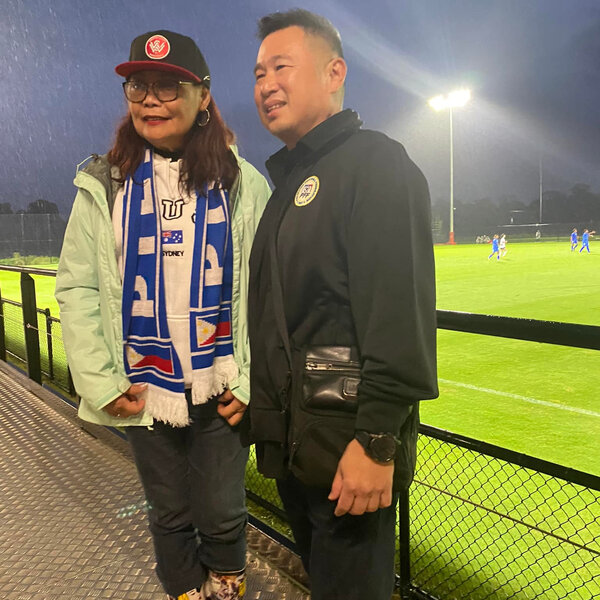 11 Apr 2022, 4pm Radio Tagumpay Jefferson Cheng is Filipino-Australian who is the Team Manager of Filipinas, and Director and part-owner of Western Sydney Wanderers Football Club. Jeff was born in Manila in 1955 and graduated from the University of the Philippines – degree in Architecture.  Jeff migrated to Australia in 1994; more of a businessman now, working on logistics in Aviation area.  Jeff shares his journey in football from playing for his college in UP.  In 2013, he became involved with the Philippine Football Federation to help out the President who is his friend; then he put his hand up to Filipinas Team Manager when it did not have a manager at the SEA Games.   He also shares his journey in becoming part-owner of the Western Sydney Wanderers Football Club. Interview by Violi Calvert Recording by Andrew Russell 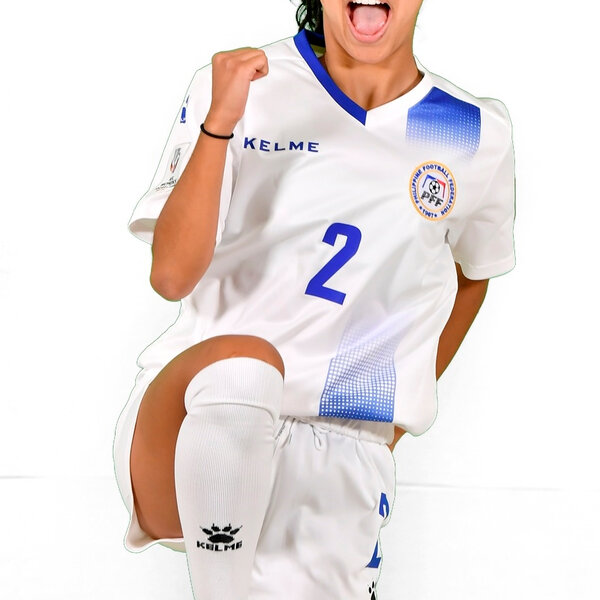 11 Apr 2022, 4pm Radio Tagumpay Malea Cesar, 18 years old, Midfielder of Filipinas, Philippine Women’s National Football Team. Malea shares her football journey from when she was five years old to being part of Filipinas.  She was born and bred in California and Oregon; with her Filipino heritage coming from her father Ben Jr while her mother Christie is American.  She is Ate to a younger brother and sister. Interview by Violi Calvert Recording by Andrew Russell Photo by Skip Tan, Filipinas Official Photographer 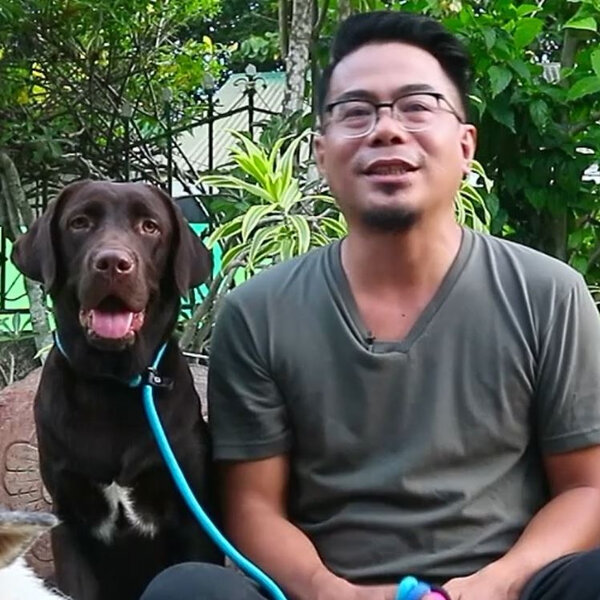 4 Apr 2022, 4pm Radio Tagumpay Lestre Zapanta is celebrated as the Philippine Dog Whisperer. To illustrate how popular our interviewee, his page is liked by 638,280 people and is followed by 1,365,286.  He has more then 15 years experience as dog whisperer. Interview by: Violi Calvert and Criz Guce Recording by: Andrew Russell 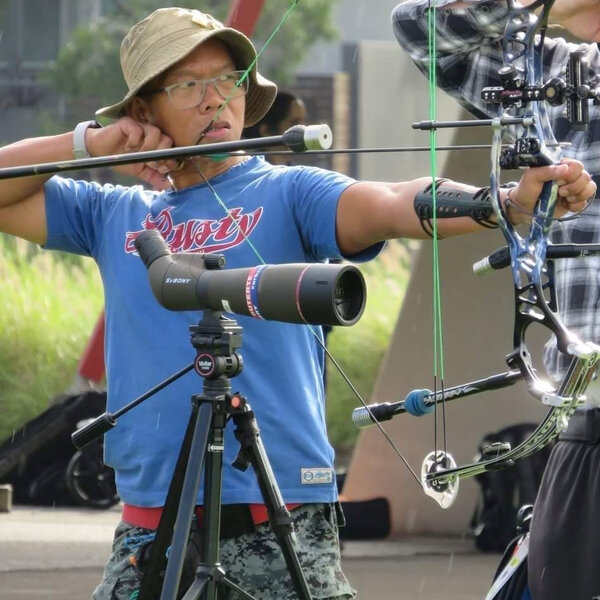